We are safe back in Norway

Arrived Farsund yesterday after very calm sailing - motorsailing in the North Sea from Scotland. Will be back to our homeplace in a couple of weeks
Lagt inn av Elisabeth og Per 3 kommentarer

37:00.31n
007:42.38w
Sailing tohether with french sailingboat Merjah ( Oceanis 37) Nice people, but dont know if they read the map crossing prohobited areas :-) No contact on radio either. We look for an anchorage outside Albufeira. Will meet Tone and Stein in a couple o
Lagt inn av Elisabeth og Per 0 kommentarer

37:00.31n
007:42.38w
Sailing together with french sailingboat Merjah ( Oceanis 37) Nice people, but dont know if they read the map crossing prohobited areas :-) No contact on radio either. We look for an anchorage outside Albufeira. Will meet Tone and Stein in a couple of days. (Friends and neighbours from Norway)
Lagt inn av Elisabeth og Per 0 kommentarer

I dag (30 juni 2015) krysser vi vårt eget spor - og Oda har seilt jorda rundt!
Veldig omtrentelig har vi seilt 25.000 nautiske mil eller ca 46.000 km pr i dag.
I tillegg har Oda beveget seg som skipslast fra Thailand til sydøst i Tyrkia.
Tida det tok rundt kloden (Fra Vilamora i Portugal til Vilamora i Portugal) er 2 år 9 mnd og12 dager eller 1015 dager.
Feiringen er utsatt til vi kommer i land i kveld :-)
Today we crosses our own track from sept 19th 2012. Oda has now done a complete circumnavigation in 1015 days. All together we have done around 25.000 nm or 46.000 km since we started from Norway (indian Ocean is not included) and we still have a few thousand nm left before we are back home in Norway in August or September.
The celebration will start when we reach an anchorage on the Algarve coast later today.
Lagt inn av Elisabeth og Per 0 kommentarer

Anchored in a crowded bay. Checking in tomorrow morning and so we move a little south i Phuket tomeet Elonnisa.
Left Phi Phi this morning – slow sailing and some motorsailing. All is good.
Big Budha on the mountain ashore watching us
07:48.986N
098:21.590e
Lagt inn av Elisabeth og Per 0 kommentarer 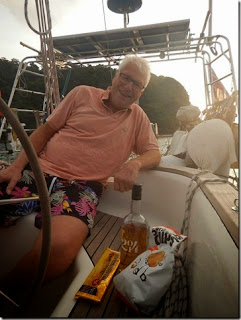 Pictures from the dramatic night and morning in Coral Sea. 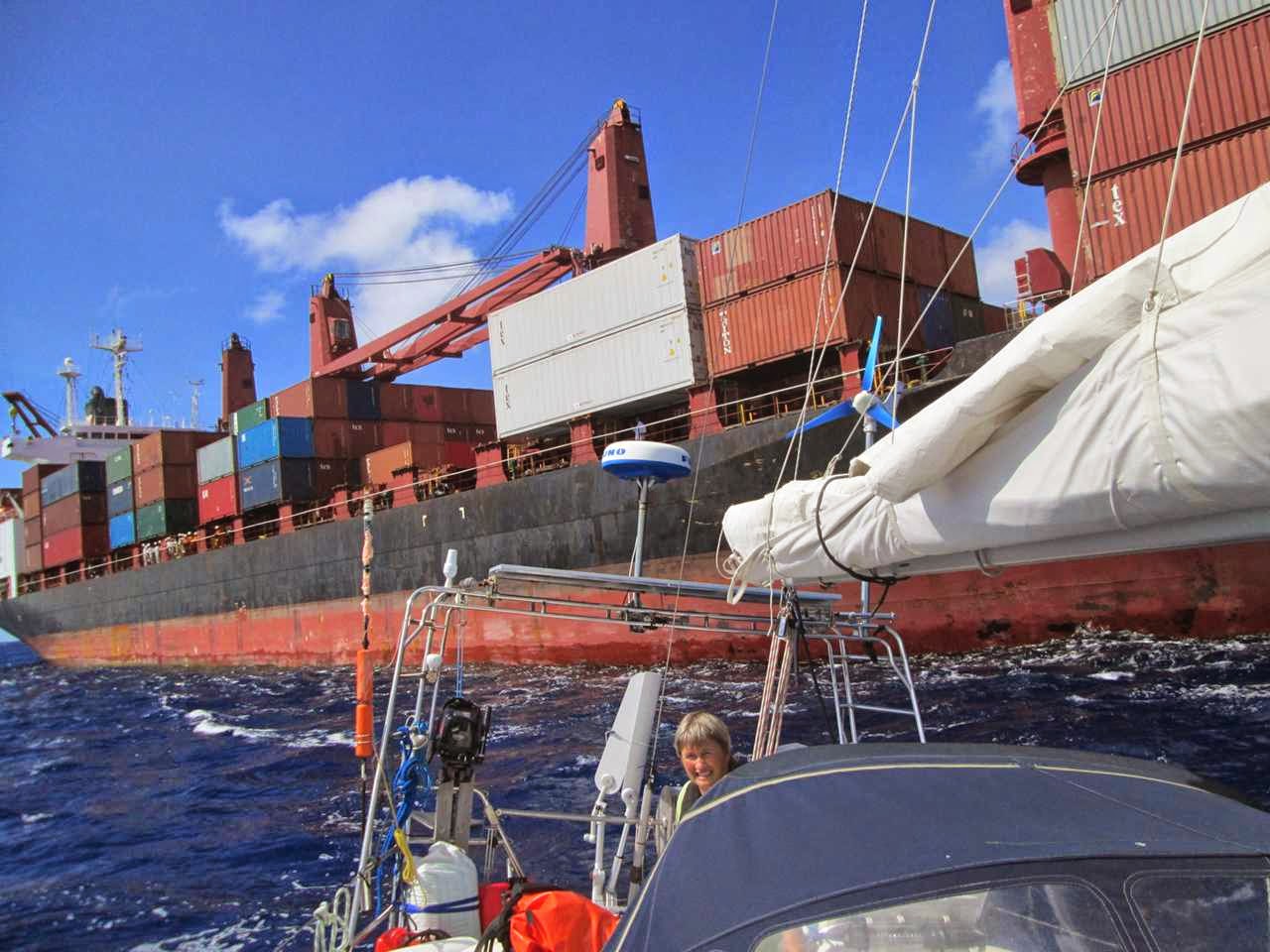 Written monday 23.6 kl 17.00   (Situation described from Odas perspective of view.  Facts can be wrong – and unluckily our electronical logbook collapsed under the accident so time and positions is difficult to recall accurate)
Yesterday evening (22.6) Stormvogel told us on VHF they found lot of water into the bilge (several hundreds liter).   It was critical because they didn't know where the leak was and it still flowed in 20 litre pr. min.
The information did not reach Southern Star which were out of VHF-range, and Oda called them on satphone – and asked them to imediately turn because we feared Stormvogel would sink and we needed their assistance.
Stormvogel concentrated on finding and stopping the leak, when Oda, after agreement with Stormvogel took responsibility to contact rescueorganisation.  Oda choosed to take contact with the norwegian rescuecenter Hovedredningssentralen in Stavanger, which they had make an agreement with, before they started their circumnavigation.
After a while Stormvogel found the leak, around the centerboard, which were newly maintained i NZ. 3 of 4 bolts were broken and centerboard was moving and they feared the leake could increase very fast. After a while Stormvogel succeded in stabilizing the moving centerboard with a peace of wood.
Southern Star was 25 nm away, but ETA should be around 1,5 hour later because Stormvogel and Oda was sailing in their direction.
After agreement with the australian / norwegian rescuorganisation the epirb in Stormvogel was activated.  Oda was warned from the norwegian rescuoperation about going onboard in Stormvogel under the circumstances with high sea and black night, but to prepare for taking the people onbord in Oda. At this moment – this was also skipper of Odas meaning – it was to risky to set on sea the 35 kg dingy from Oda.  It would also be very difficult to take people onboard in the small dingy with only one crew in the dingy under these weathercircumstances.  Using a line from the boat would may be have been the best solution to pick people up from water. Anyway we prepared also the dingy and mounted the motor on it, when it was hanging in the tripod in the mast.
Oda prepared for getting the people in Stormvogel onboard in Oda if the situation increased. Rescueorganisation told a cargoship could be here at 1830 UTC and an airplane  1930 (when the light comes) with possibility to drop rescuematerials if necessary.  We said at that time yes to both options. On question about a helicopter the norwegian rescueoperation told us we were to far away from land.
After a while skipper in Stormvogel succeded with mounting a new electrical pump in the bilge – and they got control of the incoming water, but still feared the centerboard to collapse – and the leak to be too big to handle with big chance of loosing the boat.   To get two people onboard in Oda would also have been very difficult and dangerous in the weather with around 1,5 m waves and 20 kt wind and complete darkness.  To get in the small dingy from Oda – which were prepared and ready to go – would also been very dangerous.
We all hoped the boat would not sink before Southern Star with a bigger dingy could help.  After around 1,5 hour – they came. We had long discussions among the three boats and all agreed on waiting till the daylight comes to go onboard in Stormvogel. Stormvogel monitored the situation very carefully the hole night. They were very exhausted.
The night was tense – and we all had radiocontact every 2 hours and visual contact all the time. Luckily we could wait for the daylight to go onboard in Stormvogel.  In between Stormvogel had after advise from australian rescuofficer deactivated the epirb , because they at that moment not longer was in a maydaysituation.
Southern Star crew managed the next morning in a dangerous operation to unloade the dingy and get skipper onboard in dingy – and later skipper in Oda in the same dingy and at last onboard in Stormvogel to help.
Around 0900 to skippers entered Stormvogel and was there working till the containership appeared around 1400.  Oda was securing the Southern Star skipper when he should go onboard in the dingy in case  the dingy capsized and he felt in water. We testet this operation in advance with doing a 360 turn very close to Southern Star to pick up a boey in the water, which should intend to be a man overboard.
Skipper and coskipper in Southern Star took over the communication with australien rescueorganisation and kept them informed all the time . After a while it showed up an idea from Stormvogels friends in Germany, to use sement/concrete to stabilize the senterboard in the bilge in addition to the hardwood already used.
This wish for sement was sent to australian rescueorganisations which again asked the Containership Qweilin to participate in the rescuework, but this time to give shelter to the dingy when we picked up the semt to Stormvogel.   Very close to the drifting containership (185 x 28 m) the dingy and the 3 boats one bye one did their operating sheltered from the ship.   The big dingy from Southern Star and the mothership got some damaged when the dingy was lifted onboard, but no people was hurt in the action.
The skippers on Southern Star and Oda was now the girls onboard – who useually not do manoevers like this – neither do the more experienced skippers in the dingy.  They succeded – and all were very tired and had a very nice and calm night sleeping....  The 3 boats will still sail together to Cairns, the weather is good and ETA is on saturday 28. of June
Per Mandt and Elisabeth Hval in Oda.
Position Oda kl 1700 – vanuatu time     UTC  - 06:00  24 juni 2014
16:12.79s
155:20.2e
SOG 7.0 kt
COG 269 true
wind 20 kt from 121 degrees magn
waves 1 m
561 nm to go to Cairns. ETA Cairns saturday 28th June